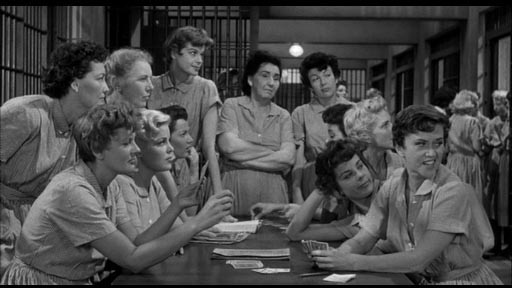 They had a bit of fun with this campy melodrama, I reckon. One prison guard tells her reliever that she’s heading off “to catch the last show at the Bijou.” “That prison movie?” says the other, incredulously. “Yeah.” “They never get things right in prison pictures.” “I know. But I like to pick out the flaws.” Me, too.

We think that the movie is going to centre on Helene Jensen (Phyllis Thaxter), a newly-received, timorous, middle-class woman who has killed a child in a car accident and is handed a 1 to 10. It’s just as well that we move away from her, because she’s hard to like; yes, she is given a rough deal and she doesn’t deserve to be abused (or straitjacketed for simply being frightened), but her over-the-top, hysterical response to every standard prison stimulus is a bit wearing – particularly when her fellow inmates are all so nice (welcoming, chatty, supportive… Hey, one even does impersonations to keep everyone amused)!

The focus shifts instead to the ruthless and cunningly beautiful Superintendent, Amelia van Zandt (Ida Lupino), who has a reasonably brutal attitude towards the women and consistently locks horns with the good, compassionate prison doctor, Dr Crane (Howard Duff). Dr Crane volunteers a diagnosis of van Zandt: that she is jealous of the women because the least of them has known love. He’s a doctor, so we accept his diagnosis. He warns van Zandt that her insistence on tough regimes may have consequences for which she alone will be held responsible.

It does. First Helene lapses into a coma after being placed in a very constrictive straitjacket. Nasty, it’s granted, but a coma is perhaps a bit over-the-top. Then there’s Joan (Audrey Totter), whose husband Glenn is in the adjacent men’s prison. He is desperate to see her, but van Zandt and the Warden of the men’s prison won’t allow a visit. Glenn is caught once trying to sneak into the women’s section, but later finds a way to break in. He catches up with Joan in the laundry storeroom and they do a bit of hot pressing of their own. Joan falls pregnant.

The good Dr Crane rather-too-enthusiastically runs to tell van Zandt and the Warden that they are to become proud parents (not exactly in the literal sense), whereas he could have more discreetly waited for Joan to be granted parole and hoped that her pregnancy would go unnoticed. The Warden tells van Zandt that if Glenn knows how to break into the women’s section, others might too, and might use that way out to escape. He tells her that if she doesn’t find out how he did it, she will lose her job.

Van Zandt drags Joan out of bed in the middle of several successive nights and interrogates her. She slaps her about. Joan collapses. The furious Dr Crane does all that he can to save her, but not even Glenn’s appearance at her bedside (he having broken into the infirmary this time, and at which Joan suddenly becomes lucid) is enough to pull her through. She dies without a mark on her face, a testament to either the recuperative powers of the oxygen tent or the lethalness of the Superintendent’s brow-beating.

Enough’s enough. The women won’t stand for it. They take hostages, riot, and are about to kill the Superintendent when Dr Crane intervenes on behalf of his old sparring partner, imploring them not to distract attention away from what van Zandt has done, not to surrender the high moral ground. The women are thinking about this when the tear gas canisters start landing, and van Zandt escapes their clutches. When she is finally cornered, she is a blithering mess.

It’s a classic 50s melodrama, very enjoyable. Just don’t expect it to get things right about what it’s like in prison. 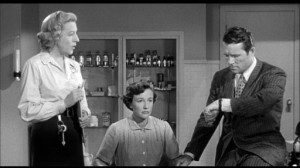 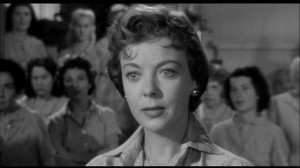