This is the alternative title of the video (on YouTube) which translates literally, it seems, as something closer to ‘Women’s Scum’. Or sometimes, intriguingly, as ‘Women’s Jelly’. The film’s original title, Life is a Woman, doesn’t appear to have ever had much traction.

Sadly, I couldn’t understand a word of it. But it seems that the movie was filmed at the Chemolgan Women’s Prison in the Alma-Ata (Almaty) region of Kazakhstan, and importantly is regarded as one of the first Soviet films to explore LGBTI themes.

The main character is Madina Galieva (Venera Nigmatulina), a Kazakh girl who, ‘led on by the beautiful words of her beloved’, stabs another man and is sent to prison. It appears that once she has done the stabby thing her beloved is content to abandon her entirely. Or I could be making that up.

Upon her arrival in prison she is clumsily and immediately pressured for sex by one of the guards (Vladimir Tolokonnikov). One Russian commentator says of this scene, in my unreliable rendering of a quite possibly unreliable Google translation, “He is so Soviet-wise human, this boss, it’s as if he was born yesterday. It does not even come to his good head that a woman, threatened by a man with a bare chest and who is in power, will speculate that she will now be raped.”

Madina is something of an ingénue in what is a very foreign environment, and she must learn to navigate her way around prison. As she does, we are exposed to some pretty standard women’s prison fare: power tussles, set ups, fights, changeroom scenes, jealousies, strip-searches, drug-taking, dress-ups, elderly and ill prisoners… and a prisoner killed after being struck once by a guard who has suffered the triple indignity of having her keys taken, being locked in a cell and then, after being let out, having her wig pulled off. There is no shortage of intimacy; comfort being found with particular regularity in the arms of Gosha (Lyudmila Baranova), for whose affections there appears to be plenty of inexplicable competition.

And, according to another loosely translated Russian reviewer, in addition to the “butch prisoners and their hens… (there are) the ladies who in principle do not fit into these categories, because the noble ones will not descend to the baseness of existence, and friendship, and most surprisingly, the film is shot in such a way that you understand – you can live in such conditions; the only question is how to live.” Exactly. 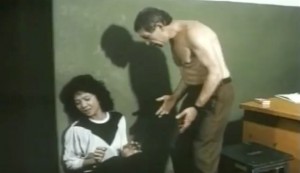 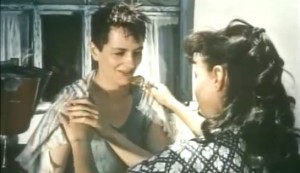 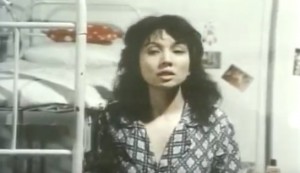 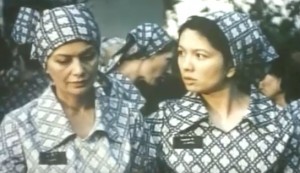