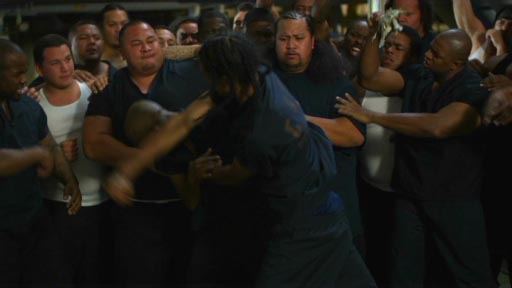 Also known as ‘Caged Animal‘ for no good reason, it seems, other than that Ving Rhames starred in the two earlier Animal movies, the second of which was directed by Ryan Combs. This unrelated movie is also directed and co-written by Combs, who allows himself the indulgence of naming the prison where the action takes place ‘Combs State Prison’. But that’s a minor indulgence compared with the decision to make the film in the first place.

It purports to be a truish story. I don’t know if that really is the case, but it seems like an excuse to show yet another tough prison where bad-ass African American prisoners kill and rape each other. As if we don’t have enough of them already.

The central figure is Miles ‘Cain’ Skinner (Rhames), who is in jail forever. He is an aging kingpin whose passion for criminal activity both in and out of prison is diminished by the arrival of his son, Ricky (Nipsey Hussle), into the same nick on an accessory to murder charge.

We’re reminded, however, that Cain is still one tough mother. He’s led shackled into a pen into which his mortal enemy, Redfoot (Robert LaSardo), is also introduced – not shackled and carrying a shank. Cain takes a few hits but gets the better of Redfoot (who killed Cain’s girl during an ambush on his nightclub, while she was in Cain’s arms) and is holding the knife to Redfoot’s throat when staff intervene. Yeah, sure. The battle with the Aryan Redfoot proves to be a mere diversion, however, and only people of colour feature once his storyline inexplicably peters out.

Cain’s waning appetite for the hurly-burly is then further diminished when he learns that he has a brain tumour and has only months to live. He has already started reading his Bible in solitary, and now confesses to his son, “I was a cancer to my family, so God blessed me with cancer. That’s how God works”.

He takes on the task of counselling young kids at risk of coming to prison, but his principal mission is to get Ricky to go straight, to not follow down his path. Ricky is at first a reluctant pupil, blaming his father for pretty much everything. But he softens over time… and has to contend with his own problems, with his own bête noire, JD Parker (Gillie Da Kid), whose gang has inflicted casualties on Ricky’s gang, and vice versa, arriving in the same prison.

In a prison where there are regular stabbings, it’s nice to see that when the two younger men finally confront each other they follow the Queensberry Rules for some time… before pulling out their mini-shanks. By then, there’s just time for a couple of surprise twists in the plot, and it’s over, leaving you wondering why you bothered.

No doubt the filmmakers would want you to see a portrait of a man desperately seeking and finding redemption, but there’s very little of a redeeming nature in this film. 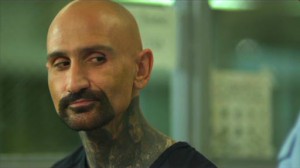 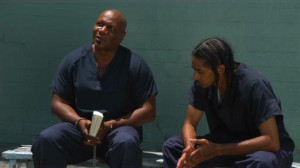