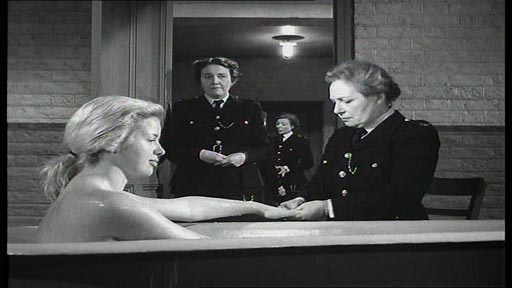 Diana Dors. Prison movie. They don’t seem to go together naturally, do they?

But here, in this drama based very loosely on the real life case of Ruth Ellis (the last woman executed in Britain) and renamed ‘Blonde Sinner‘ for the US market, Dors does an adequate job as Mary Hilton, the blonde bombshell condemned to die for the murder of her boyfriend’s lover. Hilton doesn’t just knock off a rival; the man with whom she was in love, Jim (Michael Craig), had already killed himself after being rejected by Lucy, the woman whom he loved, when Hilton goes out and calmly squares the ledger. Ellis, on the other hand, killed one of her several lovers; curiously, she and Dors both appeared in Lady Godiva Rides Again (1951), four years before her hanging.

It’s a very different Death Row movie. Hilton lives in a big room which she shares with the two prison officers who guard her round the clock, with another posted just outside the door. She is not left alone for a minute and has to sleep with the light on, presumably so that if she tries to thwart the hangman by killing herself first, the officers can see enough of her to keep her alive enough to be killed. Her wait (for a reprieve) is tense. Her relationships with those who visit her (notably her mother and her first husband) are fraught. Her relationships with those who guard her, notably the emotionally-invested Hilda MacFarlane (Yvonne Mitchell), are all that she has left.

It’s not a great movie. Despite her sultry looks and her unrequited passion for Jim, Hilton is played as very controlled (coolly leaving her first husband who had done her no wrong, coldly tracking and shooting her rival dead, silently pushing her family away and passively waiting for her appointment with the hangman), and it’s hard to feel much sympathy for her. Most of the prison officers, on the other hand, seem jolly decent types, eh?  Ruth Ellis’s execution brought about a surge in the campaign to end capital punishment. It’s hard to see film-goers desperately clamouring to save Mary Hilton, although I have no doubt that’s how we’re supposed to react.

Sure, her wait to die is a little tense, but I was untroubled when she became past tense. 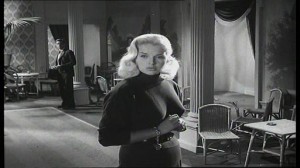 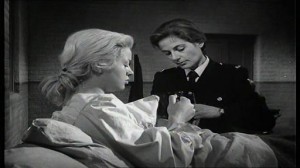