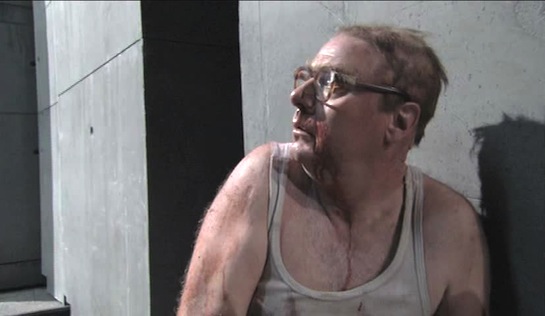 You might think that I’m struggling to find new prison movies when I have to resort to watching filmed performances of operas about prison life. And you’d be right. But at least this has more prison in it than Carmen (2003).

Czech Leoš Janá?ek’s last opera, which premiered two years after his death in 1928, is an adaptation of Fyodor Dostoevsky’s 1860 novel, Notes from the House of the Dead, based on the Russian’s experience in the Siberian prison camp in which he spent four years as a political prisoner.

It’s a series of vignettes, really, probably not capturing the harshness of prison life that Dostoevsky describes, but happy to capture the backstories of a few of the ragged inmates. The narrator of the book, the wealthy Alexander Petrovich Goryanchikov, is serving 10 years for the murder of his wife. Here (played by Olaf Bär) he’s a political prisoner, and the treatment of him when he is received into the prison on the orders of the Commandant (Sulzenko Jiri), sets the early tone; he is stripped, his hair is roughly cut, he is flogged and then put in irons while the other prisoners pounce on his good clothes and jostle each other for soup or water.

After that, we get much less of a sense of the filth, the savagery of the Siberian climate and the cramped conditions recounted by Dostoevsky. We see little of their hard labour and, even though some wear chains (and one percussionist in the orchestra is delightfully required to rattle chains from time to time), the heavy burden and ignominy of those chains is barely evident.  Mind you, we still see the prisoners in edgy fights and petty rivalries, sifting through rubbish, and several succumb to disease and injury without proper medical care; it’s not all beer and skittles.

But it is the stories of some of the inmates (and an Easter pantomime put on by the prisoners) that command the attention. The men all have sad stories. Luka Kuzmich (Stefan Margita), who is sick and getting sicker, was newly sentenced when he stabbed an overbearing major in another prison camp. The tormented Skuratov (John Mark Ainsley) fell in love with a German girl, who was then promised to a wealthy German man, whom he killed out of jealous hurt. He goes quietly mad inside. Shishkov (Gerd Grochowski) marries a girl, Akulina, whose reputation has been sullied by another man, Filka; when he marries her, he is astonished to find her pure, but later slits her throat when she professes her continuing love for Filka… who he realises is the seriously ill Luka, just before he dies in his hospital bed.

There are small moments of hope and optimism. An injured eagle is nursed back to health and released. Goryanchikov takes on a fatherly role with a young prisoner, Alyeya (Eric Stokloßa) and teaches him to read and write. And the bawdy pantomime demonstrates that despite the prisoners’ dire circumstances, their humour, creativity and energy are not lost.

The music? It’s not full of uplifting arias, that’s for sure. The score is brooding, the themes dark and the singing recitative. As if I’d know.

In time I might get to Beethoven’s prison opera, Fidelio, to see how it compares.