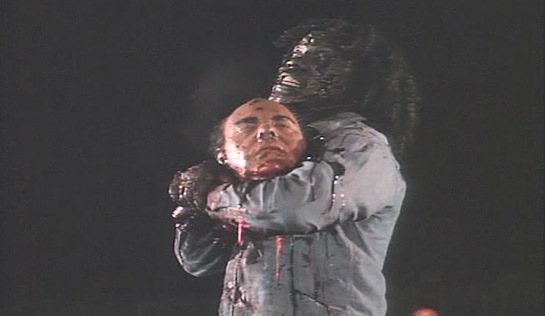 To say that this is the best prison zombie movie I’ve seen is not saying much. But it is, even if it doesn’t contain any zombies.

It’s very 1980s: lots of big hair, a battling Vietnam veteran, even bigger hair, and a renegade military man testing a new experimental strain of virus (one he hopes will make the US Army indomitable) on condemned prisoners.

Our hero is the decorated vet, Derek Keillor (Dennis Cole), who in desperation picks up a job driving for Mafia boss Vic Moretti (Anthony Franciosa). In the course of his duties Derek has a nasty tangle with some rival gangsters, killing one after a bit of a Viet Cong flashback, but it’s his tangling with Moretti’s wife Genelle under the bedsheets that lands him into real trouble. Moretti discovers the liaison, kills Genelle and frames Derek… who is found guilty of the murder and sentenced to take a ride on the electric chair.

He is placed on Death Row at the Townsend State Penitentiary, where some of the prisoners are being administered an experimental drug in return for special privileges like booze and hookers… even if they are too zonked to enjoy them. The mastermind behind the radical drug regime is Colonel Gordon Burgess (John Saxon, who doubles as the film’s director), who then pressures the prison doctor to dispense something a little less rigorously tested – to men who, after all, are about to die anyway. It’s hoped that the new drug will turn the prisoners into superhuman fighting men.

It works… to a degree. The first two injected with the new virus become exceptionally strong, one surviving the electric chair before pulling the head off Head Guard Raker (Howard George), who had effectively run the show in partnership with Vic Moretti’s prisoner brother, Franco (Michael Pataki). Franco may have power and influence and Raker in his pocket, but his menace is tempered a little by his besottedness with his young, blonde lover, Sean, who shares a double bed with him in a bespoke cell. Raker may have power and menace and be raking in big money in kickbacks by allowing his prisoners to be injected with the new drugs, but his influence is tempered a little once his head is pulled off.

Soon the virus, which manifests itself each time with a slow nosebleed, spreads to much of the prisoner population – due largely to some contaminated blood dripping into the communion wine. The affected prisoners go round killing and maiming indiscriminately, but are not impervious to bullets, which is handy for those with guns and not so handy for others. When the effects of the virus are relayed to Colonel Burgess, he calls in the army to quarantine the whole prison, and tricks a former researcher colleague who has since become a TV journalist, Tanya (‘TK’) Kerrington (Tane McClure), into going into the prison – believing that she is the only person who can prevent its spread.

Our hero Derek meanwhile manages to free himself from his cell, and then free the other inmates and seize the guards’ arsenal of weapons. They riot. They take hostages. Derek demands that the man who framed him, Vic Moretti, attend the prison. The cocky crime boss does, joining his brother, but rather than meekly succumb to the virus as Derek had planned, grabs a gun himself and takes the warden and his wife and two children (in the prison for a Christmas service) hostage and, with a distressed Sean-less Franco limping along, tries to find a way out through a sealed-up tunnel.

Inevitably, Derek and TK band together and (a) race to find a cure for the virus, and (b) race to find the same way out of the prison as Vic but with the warden’s children in tow (both the warden and Mrs Warden having met sticky ends) before Colonel Burgess employs a scorched earth policy and blows the whole place up. And inevitably, Derek and Vic have to have a final showdown in which Derek of course elects to fight with fists rather than just shooting the disarmed Mafia boss; that would be too easy.

Zombie Death House has some quite entertaining gory bits and some nastily-afflicted zombiesque prisoners, but they do not turn into zombies; they simply fight, then fizzle, and ultimately look like they’ve literally burnt out.

Reassuringly, some of the prison scenes actually look like prison… which puts it ahead of most prison zombie movies. And prison experimental drug movies, for that matter.