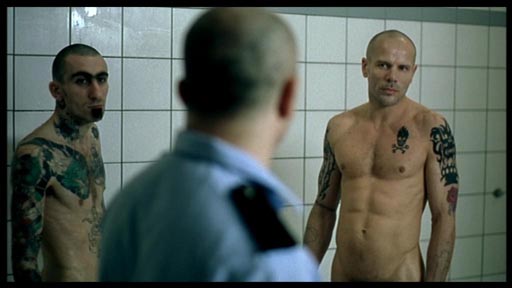 The French have something of a history of making high quality, gritty prison films – the magnificent Le Trou (1960) and the more celebrated Un Prophète (2009) as just two examples. This might not be in the same league, but it’s gritty and authentic and has the classic prison movie feel.

Zonzon (local slang for ‘jail’) is where three unlikely cellmates find themselves: Francky (Pascal Greggory) is serving ten years for a robbery during which his associate needlessly shot a man who surprised them. Francky has the sense of being hard done by (betrayed?); he is intense, physically imposing, not to be messed with… but is also rendered helpless and impotent as the gulf between himself and his wife and son widens. Kader (Jamel Debbouze) is an Arab and a recidivist thief, excitable, edgy, and destined for much more jail than his current 2 year stretch. And finally, first-timer Arnaud Grandjean (Gaël Morel), a rich kid serving six months for drug offences… and the only prisoner in a lemon polo shirt, which says all that is needed about his out-of-placeness in the maximum-security nick.

I’d like to tell you more, but my French is limited and Monsieur Amazon let me down, regrettablement, promising me anglais subtitles but giving me aucun sous-titres instead.

But it’s a film that certainly looks like it knows what it’s talking about. It cuts back and forth in time and is interspersed with the odd fantasy sequence, but it’s the little things that give it its visual credibility – the home-made weights made from water-filled bottles with which Francky works out in his cell; a visit where Francky lusts after his wife but is frustrated by the presence of his son, who is bored and wishing he were somewhere else, leaving everyone feeling awkward and bad; Grandjean’s joining with the others by virtue of a rough prison tattoo.

The strongest observations appear to be about prison hierarchies and the exercise of power – the way the pecking order is established and maintained both in the yard and in the cell, from the ever-present threat of sexual assault, to Kader removing Grandjean from his spot on the top bunk (as you might expect), to him smashing the kid’s head into a Scrabble game, presumably because the young bloke is too educated or too uppity and Kader has no other responses at his disposal.

This could be a very, very good prison movie – or it could be less than it appears. If only my French were better. The provision of any light-shedding in this regard would be gratefully received. 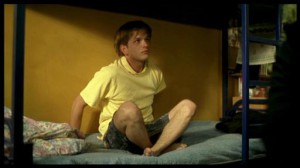 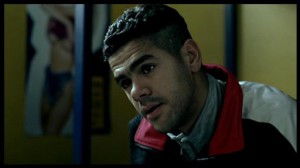