It’s the future: 2011. Back in 2002 out of control tax rates had triggered a Depression, with half the population forced out of work. In response to soaring crime rates and civil unrest Congress made new offences (such as gun ownership, ho ho, tax evasion and speech code violations) capital crimes, alongside murder and treason. Smoking has become an offence against the Clean Air, Clean Minds Act (2005) and carries a minimum one-year term. And the execution of all the new Death Row inhabitants has become a mass entertainment commodity in a privatized Virtual Reality prison system.

Not a bad start, you might think. A largely novel concept – if a little like Deathrow Gameshow (1987) in some respects – and the promise of a bit of fun and some incisive social satire. Sadly, it’s not to be.

The brave new approach to the death penalty is the brainchild of billionaire RD Crowley (Robert Davi), who runs the VR prison system… and The Games.

We’re helpfully introduced to The Games by a serious broadcaster: “’Die in The Games: Die in life!’ (is the) catchphrase for The Games, the most popular entertainment of this new century. Where champion hunters pursue their human prey across virtual reality replications of historical scenarios. The prey? Convicts from the VR prison system”.

Those convicts are kept in frozen suspension and awakened only to participate in gaming bouts, where they might be cast in medieval times in a jousting competition, or in a gun-slinging match in a western saloon… and if they lose, they are put to death by injection and their organs sold on the international black market.

The VR contests are watched exclusively on an outside screen by a small, shabby, but enthusiastic group of execution supporters who, presumably, have lost everything in the Depression, including their TVs, homes and dignity.

Now, a group of rebels – a collection of ex-military types who remain opposed the UN’s 2003 takeover of the Pentagon – is determined to free the prisoners from this horror. One rebel attempt to rescue prisoners from the ‘prison’ (a converted food warehouse), led by Will Singleton (Kayle Watson) and Stu Lewis (Terry Anderson), is partly successful; Will nobly keeps the UN forces who control and protect the Gaming industry temporarily at bay, allowing Stu and some prisoners to escape, before being captured… but not before Heinz Dietrich (J Christian Ingvordsen, also the film’s director), the Head of Security and Undersecretary of Gaming, is wounded and rendered a paraplegic.

Will is a survivor, and 12 months on, he is still alive; he keeps defeating the wheelchair-bound Dietrich in their fiercely contested and increasingly personal VR games. Dietrich is so unlikeable that even his boss, the odious Crowley, detests him (partly because of Dietrich’s team’s inability to trace a hacker who is making inroads into The Games’ computer system). When Dietrich asks Crowley why he allows him to keep VR gaming if he thinks that his mental acuity is being adversely affected by it, Crowley says to him, “It amuses me to see your frustrated attempts at trying to best Singleton. But even more than that it’s… it’s that delicious look of sorrow that you get on your face when you come out of a game and face the reality of the pathetic shell of a man you really are.” It’s nice to have a supportive boss.

The hacker, Tron (Scooter McCrae), is part of Will and Stu’s rebel cell, which includes Andrea (Kelly Gleeson), who has her own reasons for wanting to destroy Crowley’s empire: years ago she had been kidnapped and forced to be part of Crowley’s rape program… with Dietrich her ‘biggest customer’. Stu, for his part, wants to rescue Will to repay him for his friend’s sacrificial act in allowing him to escape. Stu risks having the hacker’s identity traced and jeopardizes the whole project by being introduced into the VR games to defend Will when Will is in danger of being killed.

Ultimately, Andrea goes inside to help spring Will, and they defeat a whole army to get out alive and complete their mission.

It’s a low budget offering (most of the budget would seem to have gone on tanks and explosions), which becomes more absurd the longer it goes. It packs some horrible continuity errors – abseiling escapees suddenly appearing higher up than they were in the previous shot, and broad daylight suddenly turning into night (better for showing explosions) with no commensurate advance in time – and many other sillinesses – the UN forces in tanks declining to use their weaponry until the escapees are close enough in a buggy to take them all out, for example. Significantly, the new gun ownership laws do not seem to have reduced the number of high-powered firearms in the hands of the authorities or the rebels.

I guess a VR prison is a prison. Whatever it is, the film is something of a disappointment, even allowing for the low budget. It quickly abandons the quirky social commentary of the early scenes, and replaces it with cheesy swordfights in period costume, a hackneyed German villain, gratuitous nudity, and too many firearms that are incapable of hitting targets. 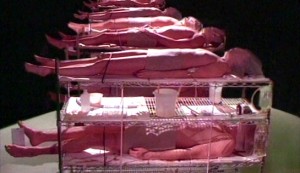 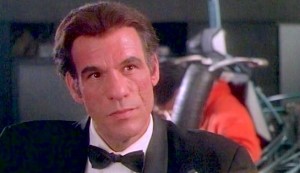 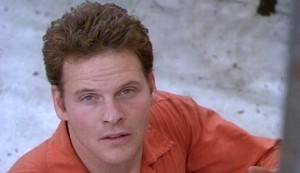 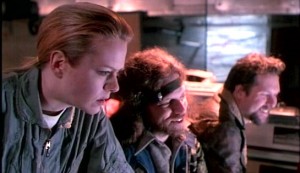