This latest Alcatraz film is ‘inspired by real events’. It is low budget and low on authenticity. It is also, sadly, at the low end of the interest scale.

Rather than be constrained by anyone’s expectations that his film should be historically accurate, director Andrew Jones has opted to make it patently clear that it is not intended as a faithful re-creation of the 1946 ‘Battle of Alcatraz’. While it borrows all the key characters (and some of the circumstances) from that abortive escape attempt, the storyline is not supported by what is known of the escape bid – and just to make sure you don’t start to think it might be something it’s not, some of the prisoners wear beards, one has his hair in a man-bun, Clarence ‘Choctaw Kid’ Carnes loses his Native American ethnicity, the mess room boasts plastic chairs, General Joseph ‘Vinegar Joe’ Stilwell wears a Hulk Hogan horseshoe moustache, and there are still more other anachronisms than you can poke a 21st century San Franciscan skyline at.

You might be forgiven for thinking that the true-life Battle of Alcatraz has drama aplenty for a filmmaker just as it occurred: the intricate planning, the seizing of weapons and taking of hostages, the bid faltering because of a key to the yard that the prisoners couldn’t locate. Here we skip those planning and execution phases, and move straight into where the bid stumbles… and the narrative toys with the idea that the bid might have been sabotaged from within.

It must be said that there are some decent dramatic moments between the five prisoners and three officers who are confined together until General Stilwell’s Marines blast their way in. In particular, Patrick O’Donnell as the thwarted, increasingly paranoid leader of the prisoner group, Joe Cretzer, does a fine job. But they are not enough.

For me, not all of the problems with this film are due to the disconnect between the 1946 event and its modern portrayal. Some, I think, relate to the casting of Bernie Coy (Gareth Nelson), who masterminded the escape bid in real life but here – even allowing for him going through a phase of mid-life radical self-reflection – couldn’t convince me that he ever belonged with the hardened Alcatraz cohort, let alone devised the escape plan. Similarly, I’m not sure that you ever get a real sense of the hardness that led Clarence Carnes (Derek Nelson), to make history as the youngest prisoner at that time ever to have been transferred to Alcatraz (after being convicted of a murder at 16 and then, three years on, escaping from Leavenworth).

Some of the problems could also be linked to the warden, James A Johnston (Erick Hayden), who says to the youthful Clarence, “With (the prospect of parole that your fellow prisoners don’t share) in mind, do you really think it’s in your best interests to keep company with murderers..?” when (a) Clarence is a convicted murderer himself, and (b) there was, presumably, a dearth of jaywalkers and writers of bad cheques in Alcatraz with whom he could associate just at that time. And who, when advised that three of his officers have been taken hostage, doesn’t immediately snap into action but instead chooses to reflect at length on Romans 13:4.

Or it could be the lack of staff in the mess room when an incident occurs, or Bernie placing a shank on the ground for Clarence to pick up, in full view, one would imagine, of the guards observing the yard from the tower. I found that I could ignore the man-bun, set aside much of the action taking place in front of a single stone wall, and even tolerate speculation about the missing key that doesn’t appear to be supported by the facts… but the open display of that shank was another matter.

I wasn’t a huge fan of Six Against the Rock (one of several dramatisations of the Battle of Alcatraz). But I prefer it to this one. 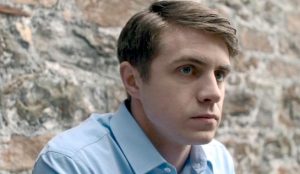 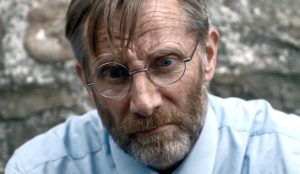 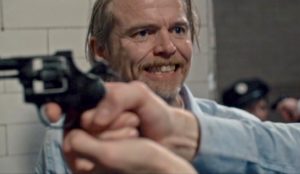 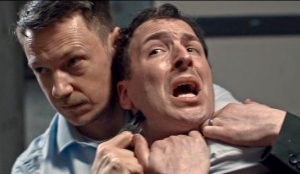 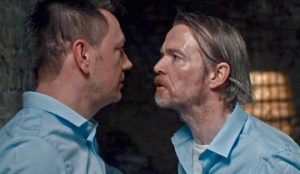 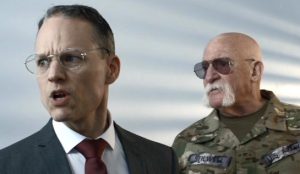