So, the whole shocking story of Alcatraz’s 29-year life as a Federal Penitentiary comes down to just two incidents, does it – the May 1946 failed escape attempt known as the ‘Battle of Alcatraz’, and the June 1962 escape bid that may or may not have been successful? Oh, and a bit of filler in-between about Clarence Carnes and Robert Stroud. Nothing else, it seems, was shocking, or part of the whole Alcatraz story.

This is either a single 3+ hour made-for-TV movie or two 1½-hour mini-series episodes; take your pick. It purports to provide a first-hand account of both the famed 1946 and 1962 incidents, pretty much all through the eyes of Clarence ‘Joe’ Carnes (Michael Beck) and is ‘based on a story’ by Carnes and a co-writer. The trouble is, it doesn’t quite match up with other accounts…. and so you’re left wondering, “Why?”

Nevertheless, having just watched Alcatraz (2018), it was refreshing to see at least the ‘Battle of Alcatraz’ play out in a manner that was a little closer to the real story: Carnes here is a Native American, as he should be, Bernie Coy (Ronny Cox) has the desperation you might expect as the architect of the escape bid, Telly Savalas plays Joe Cretzer with commendable hard-man psychopathy, and it looks a bit like 1946.

When the armed prisoners can’t find key 107 on the guards they have taken hostage (so can’t make it through to the yard and they soon realise that the game is up), Carnes retreats to his cell – having refused Cretzer’s order to finish off the wounded guards he’d shot by cutting their throats. It’s this act of compassion that later saves him from being executed… but the other Alcatraz prisoners’ reaction to him sparing the guards’ lives and leaving witnesses to testify against himself, Sam Shockley and Miran Thompson (both of whom went to the gas chamber for their part in the abortive bid) is left dangling.

Skip to 1954 and Carnes is unexpectedly debating the merits of Nietzsche and van Gogh with the bloke in the next cell, Birdman of Leavenworth Stroud (Art Carney), and is learning chess (always the domain of the master strategist). By 1960 he’s finally out of solitary, is reputed to have read 15,000 books (not a bad effort at a maximum of six books a week), is given a job in the library… and from his time in solitary confinement has somehow developed an intricate plan on how to escape from The Rock.

This is where it gets even trickier for me. Every bit that I’ve seen or read about the 1962 escape by Frank Morris (Ed Lauter) and John and Clarence Anglin either credit Morris with being the mastermind, or Allen West (here referred to as Walt Stomer and played by James MacArthur), who was the maintenance man and was supposed to go with the others – but who got stuck in his cell, either because he made the hole too small or the compound he used to disguise it set too hard. Here, there’s an iron bar in the middle of the hole that he missed and he has to dig it out, and by the time he does he has literally missed the boat. In this version, however, Carnes is the cool mastermind but doesn’t go with the others because he’s being watched so closely by the guards that it might place the whole escape bid at risk… and he really wants it to succeed because he knows it will lead to Alcatraz’s closure. I note that at least one prisoner who was a contemporary of all of the men claimed that it was entirely West’s idea and that Carnes simply “didn’t like the plan.”

In the film Carnes also credits himself, seemingly, with organising – through his chess partner, Ellsworth ‘Bumpy’ Johnson (John Amos), who was indebted to him – for a boat to pluck Morris and the Anglin brothers from the waters of San Francisco Bay and take them to safety. Johnson died in 1968 so couldn’t refute the story in 1980. It might all be true, but one imagines that Carnes would not have been paroled in the early 1970s if authorities believed that he might have had any part in the 1962 escape.

This is a long film. It doesn’t tell the ‘whole shocking story’ of Alcatraz and, in parts, lacks tempo and drama – despite solid performances from almost all of the key players. I’m not even sure that (other than for his early years) it gives an accurate impression of who Clarence Carnes was. All of which is a bit of a shame. 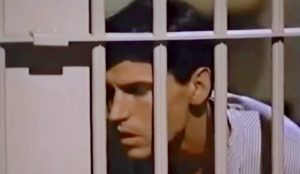 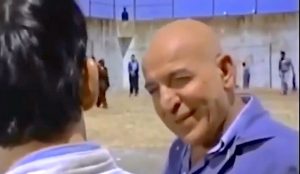 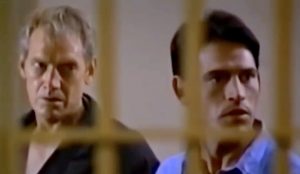 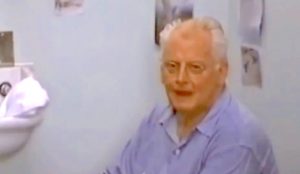 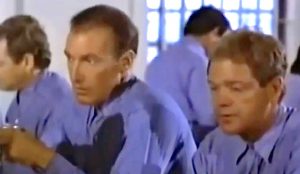 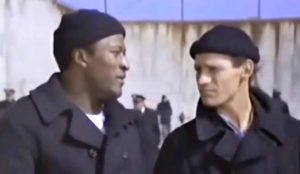 Alcatraz – The Whole Shocking Story can be found in several versions on YouTube.