If it helps avoid confusion with the disappointing Australian film also named Convict (and also released in 2014), Google suggests that the Arabic title for this film – currently available on Netflix – translates as ‘What are you, prisons?’. That might not help much, but it’s a fair question.

The film follows three men who arrive in prison together; each, bizarrely, with a tragic link to the one man…although they don’t know it.

Gaber (Bassem Samra) has not long been out of prison. He had been sent to jail for four years for trying to rob the clothing store where his wife, Azza (Inas Ezz El Din) worked. Azza, a devoted wife, had been drugged and raped by the store’s owner, Hajji Na’im (Ayman Kandeel), whose advances she had been repelling for some time, and Gaber had gone to the store to avenge the wrong. But he was sold out by Azza’s co-worker, Kawthar (Maha Sabry), who had been given the job to procure Azza for her boss; police were called, he was charged, found guilty of robbery, and given a four year sentence. Upon release – without any earlier hint – he finds that his chaste wife, too shamed to stay in the area, has abandoned their son and is working ‘in cabarets’ (as a high-end call girl). Go figure. Gaber tracks her down, and kills her; then lies in wait for Na’im, and slits his throat. And drinks his blood, as he had promised to do four years earlier. He is not penitent. Not one little bit.

We see the wealthy Walid Soliman (Ahmad Wafiq) and his girlfriend, then wife, Nour (Dina Fouad), living lavishly… until the police come and arrest him for passing fraudulent cheques to the value of E£10m. If he can pay off the family of the bereft Na’im family, he might be spared more prison time, but Nour is unable to close the deal. Walid stays in jail, staying safe through his friendship with Gaber… and his generosity with cartons of cigarettes.

When we first see the third of the trio, Tuhami (Ahmed Azmy), he is in the red uniform of a condemned man, but an early appeal is successful and he joins the others in navy blue. He still has to go back to court for sentencing, and it’s not until late that we know what he’s done: after spying on Na’im and Kawthar engaged in intimacies (he is a doorman who hangs around longer than he need to), then skolling a considerable amount of their whiskey and smoking a joint, and with passions inflamed, he rapes and kills a young girl, whom he drunkenly confuses with Kawthar. Unlike Gaber, he struggles desperately with his own guilt.

And that’s the three of them, dropped into a cramped dormitory of around 20 men, controlled by the wiry Abu-Hanata (Mohammad Farooq), who has all the charisma of a soggy pita bread. Beyond the dorm, the prison’s black economy is controlled by the canny Attia (Ahmed Rateb), a lifer who has been in jail for 35 years and enjoys the protection of the prison warden (Dina El Merghany). The young civilian administrator, Wagdi, mind you, is not so comfortable with the cosy arrangement with Attia (and, like many young whippersnapper professionals before him, has to be schooled on how he and other privileged prisoners keep the peace, and is put in his place).

Life in the dormitory is as you’d expect. Everyone sleeps on the floor. There are squabbles, resentments, no privacy. Smells. Egos. An older prisoner dies, another’s wife dies. Life happens. Informers feed bits of information back to the authorities. And it’s only a matter of time before Gaber, who was tired of Abu-Hanata’s self-appointed authority at their first meeting, mounts a challenge – and succeeds. He enjoys his new power and status and immediately sets about controlling the drugs, leading the dancing, building an empire, and seeking to muscle his way in as the whole prison’s ‘alpha’, moving the ageing Attia aside. Big mistake.

It’s a curious film. There are several Bollywood-style musical interludes. From a prison perspective, other than the warden and Wagdi, staff are virtually absent (other than inflicting early beatings and whippings, respectively, on Tuhami and Gaber for insolence); the prisoners run the show. So absent are staff, that when Tuhami (back in red after sentencing) breaks away from their grasp while being dragged to death row, he is able to get to a window, climb out of it, ponder a bit, then throw himself off a ledge – with the officers still nowhere to be seen. And the prisoners are remarkably tolerant of the informant in their midst, and exercise no caution about their activities despite knowing that they will be reported back.

Revenge is a big theme; enacted by husbands, wives, the State. But, surprisingly, the Na’im connection carries virtually no weight beyond being a common thread in the men’s and some of those revenge stories. Odd. As are some late twists and turns in the plot, which are entertaining but seem to make no sense in light of what we’ve seen before.

As for the prisoners, they never seem to leave their dormitory (unless it’s to see the warden or, one one occasion, use the toilet). Perplexingly, they seem not to do any work, or exercise, or do anything except smoke, make cups of tea, conspire to smuggle drugs and use the odd mobile phone. They simply mark time.

It begs the question: ‘What are you, prisons?’. 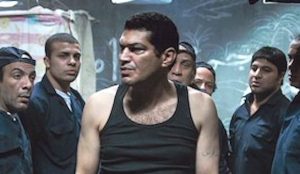 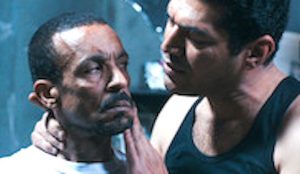 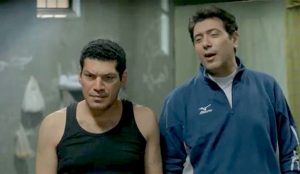 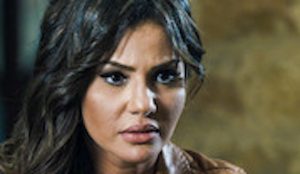 Convict can also be found listed as Wesh Sogoon, Radd Sugoun and Rad Sgoun, but is not currently on IMDb. A better translation of the Arabic title would be welcome.