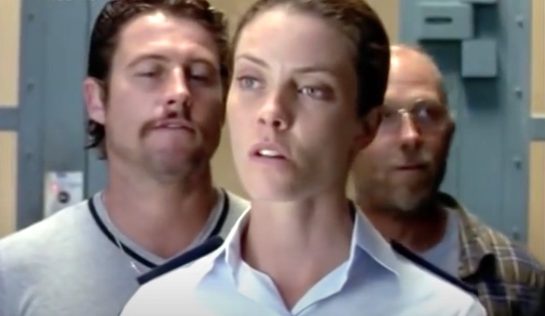 I think it must have been 1997 when I first saw this… after which, for some reason, I forgot about it entirely. On rewatching it I was reminded, in part, of Heartlock (2018) – another excellent and more recent tutorial in ‘downing a duck’ (corrupting an officer) – and of my recent comments about the relative lack of tension in real-life escape re-enactment movies like Escape from Pretoria (2020), where the outcome is very much known.

One Way Ticket is a made-for-TV film based, with a fair degree of accuracy, on the real-life escape of prisoners Peter Gibb and Archie Butterly from the Melbourne Remand Centre on 7 March 1993… with the not inconsiderable assistance of Prison Officer Heather Parker, with whom Gibb had initiated an affair. Peter Phelps plays Mick Webb (Gibb), Chris Haywood does a fair take on Butterly as Bertie Freeman, and Rachel Blakely is cast in the Heather Parker role as Deborah Carter.

Both Webb and Freeman are staring at lengthy sentences, and both expect to be soon moved from the ‘holiday camp’ remand centre to the tougher Pentridge Prison. Both are intent on escape before that occurs. Webb’s strategy is to sleep with as many female officers he can until he can convince one to facilitate his quick exit. Carter is not the first on his list; she is married to another Prison Officer, is cold, officious, controlled, disdainful toward prisoners… in other words, is perfect for dramatic purposes. Freeman’s strategy is to wait until Webb succeeds and then go along for the ride.

Webb has major standing within the prisoner group, is charming, muscled, and has his duck-downing patter down pat. Carter is trapped in an unhappy marriage. “You deserve better and you know it,” he says to her, and she knows it. Later, he gets her on her own in the gym and demands that she dance with him. Flattered, she does. It’s not long before she’s brazenly sneaking into his cell for quick intimacies; it’s exciting, unlike the rest of her life. She is smitten. She wants to be with him forever… but draws the line, initially, at effecting his escape.

But she doesn’t count on Freeman, who is getting impatient, and who sneakily lets the whole prison know about what’s going on behind those closed doors. It forces their hand. She is shunned by her colleagues, is stood down, is tossed out of home, and her career is in tatters, but before she goes she is able to take some imprints of keys. She starts working with Webb’s criminal associates on the outside to prepare the way for his escape, and readies herself to flee north to Queensland with her new beau. She doesn’t realise that Freeman is coming along as well – that he’s part of the deal. Oops, says Webb, I forgot to tell you. Bummer.

In the end, they are forced to abandon the key idea; they get some plastic explosives smuggled in and blow out a window of their accommodation unit, which faces onto the street. The escape is chaotic; Freeman breaks his ankle on dropping to the ground, they crash their getaway car, shoot a cop, Webb gets his arm broken, they hijack a motorbike, and head for the bush. They get some medical treatment, self-medicate, find a quiet pub in which Webb and Carter celebrate their ‘first date’ with bizarre recklessness, burn the pub to the ground, and ultimately get spotted and caught. Freeman, who has been in enormous pain and is keen for a shootout with police, is found dead, and it is not clear whether he shot himself rather than be taken alive, or whether the others killed him.

I understand that the police didn’t like the film, because it portrayed Webb and Carter too sympathetically. There are bits that I would quibble with (too many of the assignations seem to be in situations where, impossibly, no-one else is around, and Webb and Freeman talk too freely about their escape in front of other prisoners, not knowing whether any of them might drop them into the authorities), but it’s pretty spot on.

As a result it’s not a bad film to show prison officer recruits (men and women) about how even the most outwardly closed-off can be vulnerable to manipulation. And it serves as a reasonable record of a remarkable, highly-publicised, action-packed, scandalous love affair, prison breakout and dramatic recapture – with the mystery of how Archie Butterly died still perhaps not as clear as the film makes out.

And even more remarkable was that – after Gibb and Parker were released from their prison sentences – they stayed together. That has the surprise element that the film might lack. 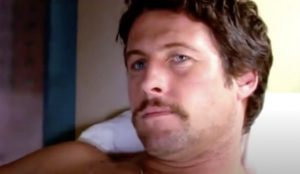 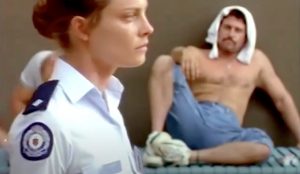 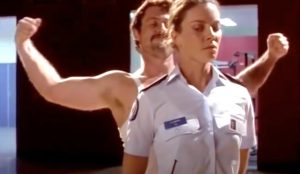 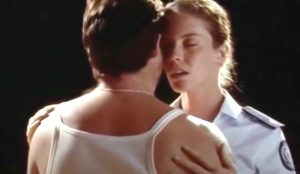 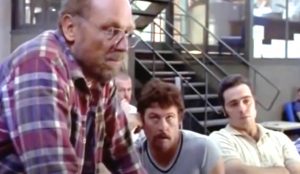 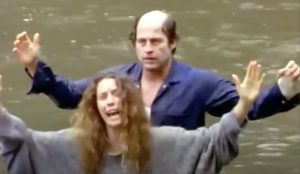