From a distance, the post-apartheid South Africa after Nelson Mandela was elected in 1994 appeared to be an exemplar of how two sides of a civil war might be united. Its Truth and Reconciliation Commission (TRC) appeared a model for how a new democratic government might deal with human rights violations perpetrated by both sides, the oppressors and the oppressed, and from that build an inclusive future for all. Up a weeny bit closer, The Forgiven shows some of the fragility of that new order as it seeks to establish itself; the persistence of deep-seated racism, the attempts to undermine the process, and the toll taken on the TRC as it bore the weight of expectations from both the black and white communities. Oh, and all of that in prison.

The film was co-written by Michael Ashton, who wrote the play The Archbishop and the Antichrist, on which is based. The story itself is derived from some real events, with one of the key protagonists, Archbishop Desmond Tutu (Forest Whitaker), the real chair of the TRC, and the other, prisoner Piet Blomfeld (Eric Bana), a fictional, ‘composite’ character.

It’s 1996, around the start of the TRC’s hearings. Blomfeld is a white supremacist, superior, smugly intelligent; a former hit squad member held in Pollsmoor Prison in Cape Town for an unspecified number of unlawful killings. Perhaps because of his political views and unpopularity with the black prisoners, or perhaps because the prison system still affords white prisoners preferential treatment, he lives in a cell on his own while the black prisoners live in cramped dormitories.

He cheekily writes to Tutu, quoting Milton and Plato, confident that the TRC chair will not be able to resist a face-to-face meeting. He’s right. But when the Archbishop turns up, Blomfeld is not interested in making amends, or reparation, or seeing forgiveness, or shedding light on the fate of missing black citizens. He wants to play a game. He repeatedly calls Tutu kaffir, hotnot, boy. He baits the Archbishop, taunts him, and sets out to be as offensive as he can; the embodiment of Lucifer in Paradise Lost. He boasts of offing many blacks, and enjoying it. His intention in seeking the meeting, he says, is “to offer (Tutu) enlightenment”. And when Tutu refers to civil war, he says he welcomes the prospect, as “out of the bloodbath emerges the victor… but the winner who emerges – listen to me – will be white.”

Meanwhile, prison life goes on. The film cannot avoid depicting Pollsmoor’s notorious gang culture (covered in more detail in the 2017 South African film The Number); we watch one teenaged prisoner, Benjamin (Nandiphile Mbeshu), fail to correctly answer the critical question asked of all aspirants to the 28s gang and, through that failure, become its leader’s wyfie (woman). We see a more canny young man pass the test and then be required to stab a prison officer as part of his initiation. Having watched at least three movies where the same test question is revealed, I think I can now approach it with confidence should I ever be put in that position.

Anyway, when Tutu bravely goes back to Pollsmoor for Round 2 with Blomfeld, having promised a grieving mother, Mrs Morobe (Thandi Makhubele), that he would do all he could to find out what happened to her missing daughter, he has to endure more cockiness and hatred from the prisoner, who seeks to make it clear that he is not seeking amnesty on the grounds that his crimes were politically motivated: “Killing someone is never political, no matter what anyone says. Killing someone is personal. It’s always, always personal.” Tutu is knocked about by the barrage and seems to be on the ropes, but he throws one last devastating jab; he produces a tattered photo of a young black girl, and asks Blomfeld why he carried it for 40 years and why he had it on him when he was arrested. Blomfeld promptly terminates the visit.

The visit has a profound, if not immediate, effect. Blomfeld goes into bat for young Benjamin, who had tried to stab him in a desperate attempt to find a release from his wyfie role. And he tangles with officer Francois Schmidt (Jeff Gum), who years earlier was in the same hit squad as him, and has reason to fear the prisoner assisting any TRC investigation and implicating him. Schmidt, it is noted, seems to have changed little and – like Blomfeld – has retained his hatred of blacks from when he used to ‘neutralise’ them, but this somehow doesn’t stop him from dealing drugs with the 28s.

It is a compelling film, in some respects. Bana’s Blomfeld is disturbingly abhorrent. Whitaker’s Tutu is less captivating, possibly because it’s hard to unsee his fake nose, which is so large it must be credited separately. The scenes of the TRC hearing where another prison officer, Hansi Coetzee (Morné Visser), ultimately gives evidence about what happened to the daughter of Mrs Morobe are moving and restorative.

So, it has its moments. But is it possible that a man who carries such a venomous, deep-rooted hatred and contempt for black citizenry would carry a black child’s picture around with him for 40 years? I think not. Having said that, it would be nice if all monsters could carry a trinket or photo or piece of memorabilia that might unlock their trauma, their psychopathy, and turn them around soon after arrest. I’ll put it to the 28s if I ever get the chance. 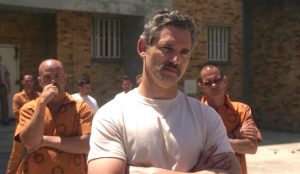 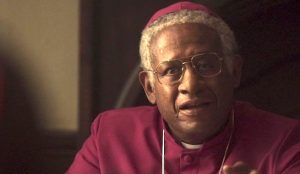 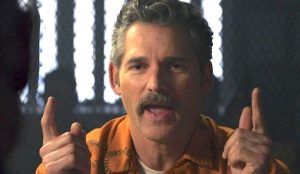 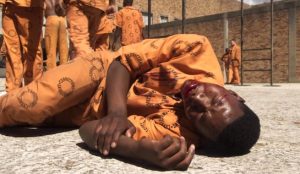 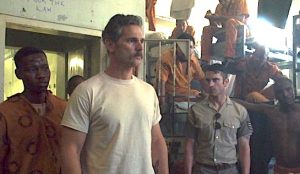 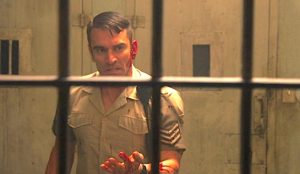