The Number is based on Jonny Steinberg’s non-fiction book of the same name, based in turn on interviews with Magadien Wentzel, a former high-ranking 28s gang member who served time in the Pollsmoor Prison in Cape Town. Both inside and outside jail, Wentzel has, it seems, so far defied the gang’s dictum that the only way out is through death.  The film sheds light on the mysterious workings of the brutal, ritualistic, militaristic prison gangs in South Africa which maintain their traditions of well over a hundred years… and from which Magadien decides to walk away rather than see his son follow the same path.

Now, at his parole hearing late in the film, Magadien (Mothusi Magano) seems to give his name as Magadien Williams.

Whatever his name, he holds the senior position of Magistrate within the gang, and has even greater ambition. He approaches the boss, China Boy (Presley Chweneyagae), to register his interest in being appointed a General. But he is passed over for the post, with that honour being handed to the smooth Rafiq (Charlton George), who has a superior source of drugs and some warders, including the hard-ass Torein (Deon Lotz), in his pocket.

If Magadien is disappointed, he doesn’t really show it, but he becomes surprisingly vulnerable. A new reformist warden, Jacobs (Kevin Smith), has just started in the job. “I am here to change things,” he tells the prisoner group. “You know you don’t matter?” the 28s tell him. “We run things here.” “You run nothing,” Jacobs says, but we know he lies. Undeterred by the exchange and the challenge, he targets Magadien, whom he knows was once a law student before falling into crime and gang life, approaching him with a polite enquiry about his son. “Do you really want him to end up like you?” he asks. It hits home.

Magadien starts to reëvaluate stuff. He urges his fellow gang members to give Jacobs a go, apologises to a young wyfie he raped, worries about his 10ish-year-old son getting a gang tattoo, and intervenes twice in attempts by the 28s to stab Jacobs. He becomes very unpopular with his fellow gang members, and is sent to solitary for his own safety. Even there, the gang is able to get glass shards put into his food.

Jacobs’ approach is smart. While working on Magadien’s paternal instincts, he also goes to Magadien’s partner, Bridget, and gives her food, clothing and money: a tactic straight out of the Singaporean deradicalisation handbook from 20 years ago. And deradicalisation is exactly what this is about.

When Jacobs is transferred, normal service resumes, and Magadien must again fend for himself.

This an excellent prison movie. Based on Wenzel’s advice it documents a number of the 28s’ recruitment and initiation processes. Magadien’s torn loyalties and Jacobs’ steely resolve to smash the gangs’ influence are both powerful themes, and the performances of the entire cast are exceptional.

South Africa’s gangs have been the subject of cinematic interest before: Noem My Skollie (2016), for example, came out just a year before this one. In relation to that movie I referred to the gang system as “an intriguing, unfathomable, fearsome entity backed by a dark and complex tradition.” The Number does a much better job of making it more fathomable but no less dark and complex, even if the practice of one of the prisoners, Buttons (Warren Masemola), to wear a folded hand towel on his head continues to wholly baffle me.

Absolutely worth a look. 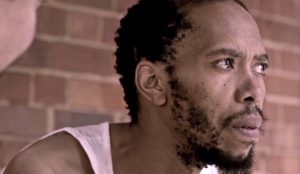 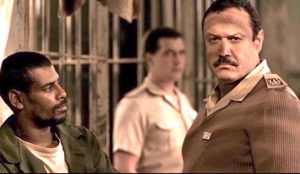 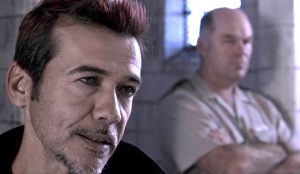 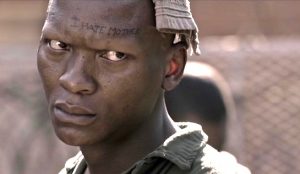 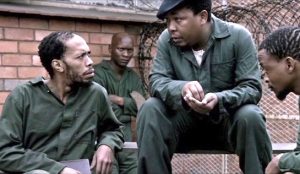 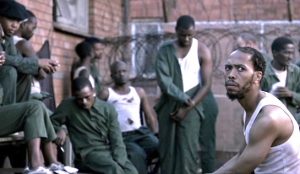