“Without the elephant of a doubt” (to quote ‘Slip’ Mahoney), this 39th Bowery Boys comedy is a better prison movie than their 19th [Triple Trouble (1950)]. I’m just not sure that says a great deal.

‘Chuck’ Anderson (David Condon), the only one of the Boys with a job, is a reporter at the New York Blade. He is sent undercover into the State Penitentiary to sniff out some rumoured corruption, but is immediately set upon by Big Greenie (Michael Ross), a man of few words: “Stool pigeon, huh? Newspaper man,” he says, and puts him in hospital.

A fellow reporter at the Blade, Cy Bowman, seeks out Chuck’s pals – Slip (Leo Gorcey), ‘Sach’ Jones (Huntz Hall) and ‘Butch’ Williams (Bennie Bartlett) – to alert them to their friend’s situation… and happily goes along with their offer to go into the prison to complete the undercover investigation. They are encouraged to commit a real crime so as not to attract attention like Chuck, and so they do a burglary on a local jewellery store. They hand over the proceeds to Bowman and he undertakes to return the items to the shop owner and to alert the authorities about their true mission. Of course, he does neither; he owes $1,500 to a bookie and later denies all knowledge of the Boys when they don’t appear to be treating their time in prison too seriously and, at their request, the brand new warden checks out their story.

But it doesn’t take long for the Boys to stumble upon what’s going on. One prisoner, Percival P Lannigan (Anthony Caruso), is a proper Mr Big in the prison, modelled, perhaps, on the ‘Bull’ Bransom character in Blackwell’s Island (1939). Lannigan calls all the shots, has head guard Captain Jenkins (Barton MacLane, in his eighth prison movie, I think) and many others in his pocket, lives in a luxurious suite, has his eggs Benedict and fresh orange juice delivered on a silver service, and can call upon the services of a personal barber. Oh, and has enforcer Big Greenie in his entourage. Yet when the Boys blow the whistle and convince the Warden, BW Oswald (Percy Helton) to check out Lannigan’s quarters for himself, Jenkins and his men, one step ahead, have already restored the suite to a normal cell by the time the warden does his inspection.

The Boys – now clearly identified as stoolies – are in a bit of strife, but their cellmate, Hank (Harry Tyler), has been working on a tunnel for 22 years and, after deciding that he might actually prefer to stay in prison, offers it to them. They seize upon the chance to escape, but instead of the tunnel finishing under a garage, as the plans indicate, it ends (as do the Boys, in a nod to Laurel and Hardy’s 1927 short film The Second Hundred Years) under the carpet in the Warden’s office. Before they can retreat the Warden enters… having in the meantime snuck back to have another look at Lannigan’s cell, and this time seen the real version in all its opulence. He is accordingly a little less disbelieving of the story the Boys had told him.

Then, just to fully confirm things, they are joined in the office by Lannigan – armed with a large knife – and his two lieutenants (one of whom is Big Greenie, naturally). A fight ensues, and against all odds the Boys overcome them (and Jenkins) to carry the day. Hooray!

I had to rewatch Triple Trouble to see why I preferred this film which, you would think, would be even more formulaic after 19 Bowery Boys films between them. Slip remains, of course, the brains of the outfit and very prone to the odd malapropism. Sach remains his dimwitted foil and Butch has no real presence. The slapstick goofiness sometimes wears quite thin (such as in protracted scenes with the prison psychiatrist), but overall the storyline holds together a bit more strongly than the earlier film, and the ending refreshingly avoids the temptation to have them feted as heroes. 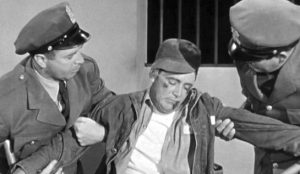 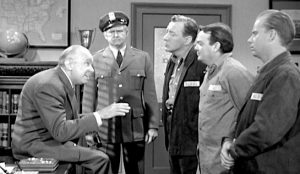 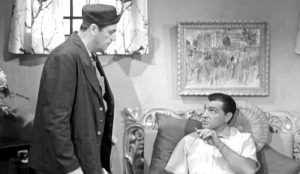 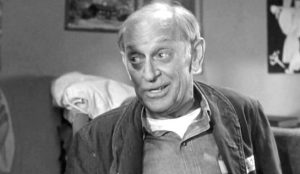 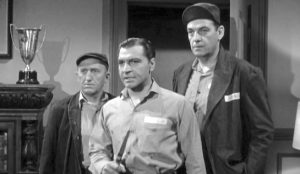 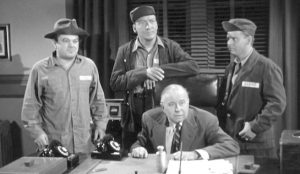