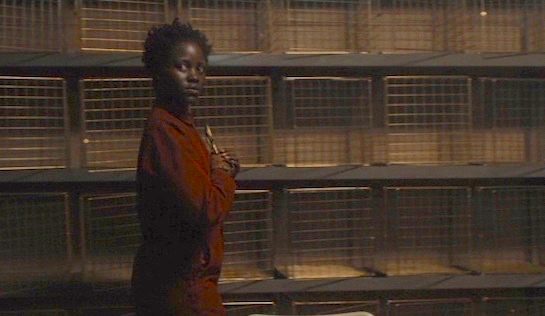 I knew before I watched this that it contained no prison at all. Nada. Zilch. But give me massed red boiler-suits and I’ll have trouble seeing anything other than a commentary on mass incarceration in America, or at least something prisonny. And I was hoping that, not unlike Chicken Run, for example, or any of the Das Experiment variants, maybe it didn’t need to have any prison scenes to make a contribution to the genre.

The boiler-suits don’t start off massed. In fact, there are none at all when the well-heeled Wilson family – Gabe (Winston Duke), Adelaide (Lupita Nyong’o) and their children Zora (Shahadi Wright Joseph) and Jason (Evan Alex) – arrive at their summer home. It’s when Gabe insists on a visit to the beach at nearby Santa Cruz (in a keep-up-with-the-Joneses catch-up with their white friends, the Tylers), that the trepidation starts to kick in. Adelaide doesn’t want to go; she is transported back to a traumatic time when, as a very young girl, she was allowed to wander after dark at the very same beach by her father and, straying into a house of mirrors, came face-to-face with a real mirror image – an identical girl… and she is filled with a sense of foreboding.

They go to the beach, nonetheless, and survive (despite the odd bit of creepiness), but back home a family of four appear, all dressed in red, in their driveway, and respond very poorly to suggestions that they leave. They force their way into the house, are more than a little menacing, and, well, do an excellent job of terrorising the Wilsons. They carry large shears; all the better for cutting throats, it seems. They are, upon examination, doppelgängers of each the family members. “It’s us!” Jason notes, transfixed. Yet only the cloned mother, Red (Lupita Nyong’o, again), it seems, is capable of speaking – in a raspy, strangulated voice. “What are you people?” Gabe asks. “We are Americans,” says Red. That’s before the carnage starts.

The Wilsons manage to escape to the Tylers’ abode, not before battles and bloodshed, and find them all slaughtered by four red-coveralled Tyler doppelgängers. The TV news contains early reports of people being butchered by their red shadows everywhere. And it’s not over. Far from it.

The film allows interpretations on so many levels that it’s not hard to construct a credible link to America’s prison population. In addition to allusions to Jeremiah 11:11 and observations about the duality of human nature, director Jordan Peele has spoken about the film being about outsiders and us lying to ourselves about our guilt, our shame, our sins. I’m prepared to concentrate instead on the meaning attached to the red boiler-suits.

“I’ve been waiting for this day for so long,” says Red, armed and ready to sever her connection to Adelaide for all time. “I call it… the untethering.” Her family, foist upon her by the need to be in total sync with Adelaide, sit by, in darkness, also ready to wreak havoc. They are inarticulate, angry, resentful, oppressed, soulless, violent. They have emerged from the shadows, the underground, from ghettos, bitter at the opportunities that their doppelgängers have been given and which they have been denied. “How it must have been to grow up with the sky,” Red muses. They have been denied the essence of being that could make them whole, and are vengeful.

Is there a message in that for America? Is there, perhaps, some other large group of red-suited people, stretching across the land, who are largely hidden from the mainstream world and exactly like me and you, but with deficits they have had no say in? And angry, repressed, resentful. Growing in number. Will they at some point organise, find their voice (literally), and rise up? It doesn’t augur well.

I really don’t know. But Us is a fine horror movie, whether you accept the prison allegory or not. 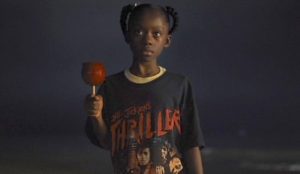 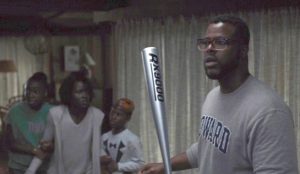 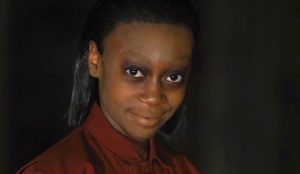 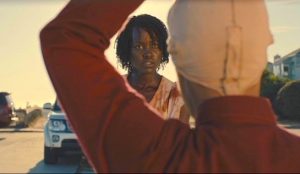