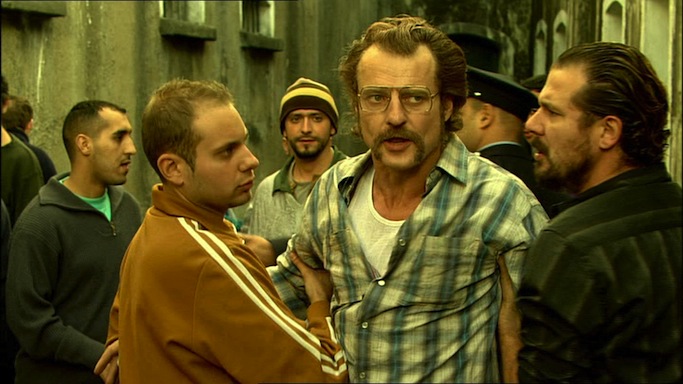 It doesn’t help, of course, if you’re innocent and in a foreign prison, as in this case. The hell starts with two bus drivers taking half a busload of Moroccans back to Morocco. The boss of the bus company and his girlfriend go along for the ride. On arrival in Tangier, the two drivers, Marcel Van Loock (Filip Peeters) and Wim Moreels (Axel Daeseleire), are sent off to their hotel while the boss takes the bus to get serviced. The next day, the boss, Jack Scholten (Peter Bolhuis) tells Marcel and Wim that he and his lover have decided to fly back. Just before reaching the ferry, the bus is pulled over and the Police find 350 kg (or 350 lbs, depending on whose translation you rely) of hashish hidden away in the luggage compartment.

Marcel is cross. Very cross. He is not going to wear this for anyone. He gives up his boss to the Police in a flash, and waits for the Moroccan judicial process to set him free. It doesn’t. The trial lasts two minutes; Marcel does not even get the opportunity to protest his innocence. He and Wim get 5 years; Scholten gets seven. Scholten buys his girlfriend’s freedom, and gets himself moved to a better jail.

The jail in which Marcel and Wim are left ticks all the boxes for a quasi-Middle Eastern horror prison: rats, an open, non-flushable toilet (and no water) in the cramped dormitory, prisoners sleeping on the floor, corrupt guards, baton beatings… and so on. Virtually nothing is provided, but everything (food, blankets, privacy, guards) can all be bought with a couple of packets of Marlboro. If you don’t have family providing you with the Marlboros, you can’t survive. Wim resorts to providing sexual favours to stay alive.

As bad as the conditions are (and they improve markedly when all the European prisoners are moved to a better jail – with beds – ahead of an inspection by a European Union delegation) it’s not the conditions that are the problem: it’s Marcel’s impotence in dealing with his wrongful imprisonment in a foreign country. The Belgian consul simply assumes he’s guilty and begrudgingly provides (very little) assistance. The Moroccan prison authorities dislike his whinging. His appeal is dealt with as swiftly as his trial, with his lawyer (who was only concerned with Scholten’s interests at the trial, for it was Scholten who was paying the bills) bringing up no new evidence in the absence of a substantial investment of Belgian francs. Back home his wife Agnes (Els Olaerts) and her pompous brother-in-law Jozef try desperately to drum up support from the Belgian government and the media to bring him back home. And to keep him in Marlboros they can’t afford.

Marcel can do nothing but get on with his jail, finding support from another middle-aged Belgian, Rudy (Peter Gorissen).  They are almost ridiculous; the ailing Marcel, struck down with tuberculosis, a throwback to another era with his old-school morality and 70s moustache, and the proper, slightly camp Rudy. “Being hungry, cold, humiliated… a man can take all that,” says Rudy. “But the daily battle with your own thoughts – that’s a different matter.”  When his wife sends him a ‘Dear John’, the real battle begins for Rudy – so much so that he even masterminds an unlikely escape. Marcel is a wheezy liability and is quickly captured; Rudy doesn’t do much better. The beating Marcel receives probably doesn’t help his tubercles; Rudy’s time at freedom does nothing to help him with his demons.

Hell in Tangier is based on a true story, that of Pierre Stukken, a bus driver from Antwerp. Just how faithfully the film follows Stukken’s story is hard to say. I’ve read one interview with Stukken in which he says that he wasn’t personally abused by the Moroccan guards, but saw evidence of it having happened to others. That’s not exactly how the film plays out, with Marcel being on the receiving end of several severe beatings, but one can perhaps forgive a bit of dramatic licence. The racial stereotyping is perhaps a little harder to take. But it’s a worthwhile addition to the genre simply because it refuses to depict the foreign guards and awful prison conditions as the greatest horrors to be overcome.

Stukken was suddenly released after serving 2 years 3 months of his sentence. Marcel, too – returning home a very sick and terribly aged man. With a bitterly jaundiced view of bosses, no doubt. 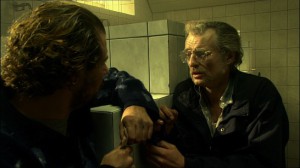 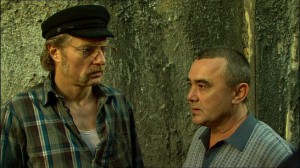