Also known as ‘Excessive Torture in a Female Prison Camp’ (as distinct from reasonable, permissible torture, of course), this is a film more about love and patriotism than either escape or torture. END_OF_DOCUMENT_TOKEN_TO_BE_REPLACED

Cynical, arrogant, foppish star lawyer Konrad von Seidlitz (Kai Wiesinger) engineers a 14 day spell in prison for himself by refusing to pay traffic fines – a stunt to protest being fined in the first place, and to give his legal firm some free publicity (celebrating his act of civil courage). And to demonstrate that he can do time in prison easily. END_OF_DOCUMENT_TOKEN_TO_BE_REPLACED

Somehow, this film slipped past the gatekeeper. But if I ever wanted to remind myself why I avoid exploitative Women in Prison movies, this would do the trick. END_OF_DOCUMENT_TOKEN_TO_BE_REPLACED

A “combination of commercialism and penal reform” is how prison Warden Bledsoe (Hal Orlandini) describes the “unique experiment” that is his women’s prison’s operating model. It’s not unique, one suspects, and it’s not penal reform, but it is commercial: the renting out of its prettier prisoners at the local bordello. END_OF_DOCUMENT_TOKEN_TO_BE_REPLACED

Shot Caller might be one of those rare films that I enjoyed in spite of itself. Or myself. END_OF_DOCUMENT_TOKEN_TO_BE_REPLACED

For starters, I’m not sure why this horror movie is called The Chair. Yes, there is an electric chair, but it doesn’t make an appearance until the last few minutes of the film, and it doesn’t even loom large over the preceding action. It’s a little like calling The Shawshank Redemption ‘The Beach.’ END_OF_DOCUMENT_TOKEN_TO_BE_REPLACED

A young kid with a bit of potential but a tough upbringing starts up a criminal gang with three of his mates. Much later, in his late teenage years, he (with another of his gang) is caught red-handed inside a shop they are burgling; he gets two years in prison, plus six cuts with a heavy cane. He survives by reading and writing letters and telling stories. His mate is not so lucky; he is repeatedly raped and becomes a gang leader’s wyfie (woman). After his release the young man’s fortuitous pursuit of a romantic interest narrowly saves him from joining his other three gang members in a criminal exploit that goes horribly wrong. The others nonetheless elect him as the fall guy, but once the trial begins they belatedly, and ruefully, admit that he wasn’t there. They hang. He doesn’t. It’s a story that takes almost 2½ hours to tell. END_OF_DOCUMENT_TOKEN_TO_BE_REPLACED 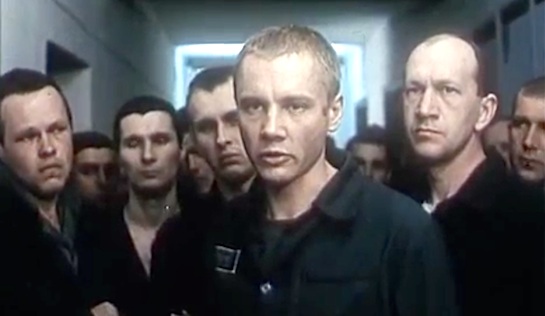 ‘Bespredel’ in Russian would seem to mean ‘lawlessness’… but also ‘limitless’ or ‘anything goes’. “What is [bespredel]?” the prison’s top bespredelshchik and string-puller, The Prince, is asked. “[Bespredel] is a trap,” he replies. I hope that helps. END_OF_DOCUMENT_TOKEN_TO_BE_REPLACED

I can be a wee bit mistrustful, I know. As soon as I finished watching this movie, based on the life of Yevgenia (or Eugenia) Ginzburg, I sought out her true life story to see if it matched the film version. There are some differences between the two, it seems, and some of which I get; after all, you want people to watch the movie. END_OF_DOCUMENT_TOKEN_TO_BE_REPLACED